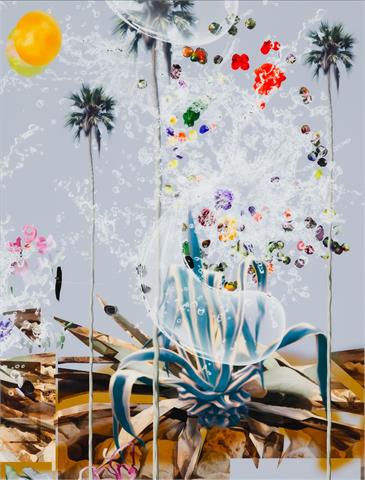 Petra Cortright’s core practice is the creation and distribution of digital and physical images using consumer or corporate softwares. She became renowned for making self-portrait videos that use her computer’s webcam and default effects tools, which she would then upload to YouTube and caption with spam text. Cortright’s paintings on aluminum, linen, paper, or acrylic are created in Photoshop using painting software and appropriated images, icons, and marks. The digital files are endlessly modifiable, but at a “decisive moment” they are translated into two-dimensional objects. They become finite, yet their range of motifs and marks, and their disorienting perspectives and dimensions suggest dynamic change. Cortright lives and works in Los Angeles, CA. She studied Fine Arts at Parsons School of Design, The New School, New York, NY (2008) and the California College of the Arts, San Francisco, CA (2004).