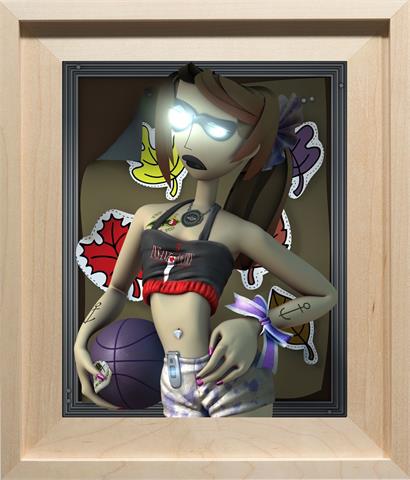 With Self-Portrait as Clone of Jeanne d’Arc Bunny Rogers offers a gateway into the mythology of her generation. Employing erasure not as a literal gesture but rather as a playful, rhetorical figure, Rogers removes her own image as the subject of self-portraiture and replaces it with an adopted persona – the angsty Joan of Arc from MTV’s cult hit Clone High, an animated series that aired between 2002-2003. Blown up to monumental proportions, Roger’s serial self-portrait features her alter ego in fifteen different positions and situations, including a plethora of symbols and references drawn from her personal life and pop culture. Using the cartoon character as a surrogate of herself, Rogers spins a web of associations that are both subjective and relatable. In her practice, Rogers often references the world of online gaming and the malleable identities endemic to role-playing and fantasy communities while exploring themes of alienation, violence, desire, and the elastic notion of self that is present in contemporary life and mediated society. Using her character as a proxy, the artist also reflects on the complexity of adolescent femininity – and its inherent angst, ferocity, desire, and narcissism.

Questions about this object

No questions have been asked so far.

This text has been machine-translated with Google Translate. We do not guarantee a complete and accurate translation, we also exclude liability for incorrect information.