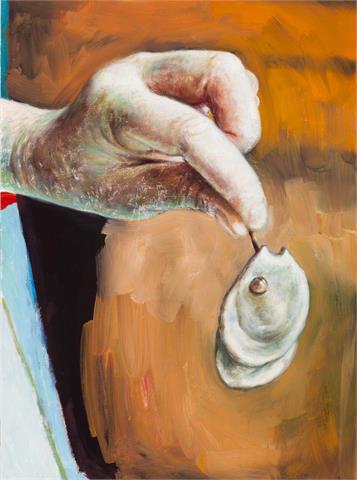 The shell depicted in Antje Majewski’s painting Muschel mit Perle aus dem Atelier von Jeanne Mammen (2013) was preserved in the studio apartment of Berlin-based artist Jeanne Mammen (1890-1976), which, since her death has been maintained in its almost original state by the Jeanne Mammen Society. Mammen, a successful painter and graphic designer during the 1920s, ceased public work during the National Socialist Regime and withdrew into her home, which became both a fortress and cocoon. The shells, carvings and figurines amassed there by Mammen struck a meaningful cord with Antje Majewski, whose complex body of work The Museum in the Garage deals with objects whose value stems not from commerce but rather constructions of memory and history. Parts of Mammen’s collection perfectly mirror objects found in Majewski’s own studio, and the painting weaves a narrative bond between the two women, their art and their fascination with the things we hold close.